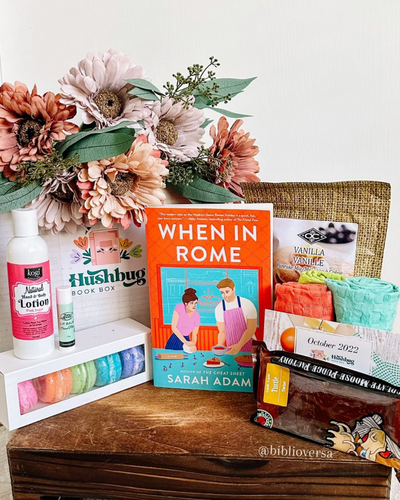 For the October 2022 box, we’ve selected When in Rome by Sarah Adams. In this sweeter-than-sugar tale, pop star Rae Rose a.k.a. Amelia channels her idol Audrey Hepburn and takes an impromptu vacation, escaping the unrelenting stresses of life in the spotlight by spending time in a small Kentucky town. While she’s there, she ends up meeting and falling for the grumpy local pie shop owner — and finally finding a place that truly feels like home.

In honour of Amelia’s sweet personality and Noah’s prowess with baked goods, this box is filled with all kinds of treats and confection-inspired delights — we hope they’ll allow you to embark on your own staycation, curling up with a great book and taking some time to treat yourself.

When she’s on stage as Rae Rose, Amelia has a certain look that’s required — long hair, plenty of makeup, and probably a fair bit of glitter. In contrast, when she’s relaxing in Rome, she often doesn’t wear much more than her signature retro eyeliner (though Noah endlessly speculates about the natural pink hue of her lips). Combine the best of both worlds with two moisturizing products that are perfect for just lounging at home, with a bit of a pop star twist.

At one point, Noah refers to Amelia as being sweet as powdered sugar. So, it was only fitting that we include the Pink Sugar Hand and Body Lotion from Kogi Naturals. The creamy lotion will leave your skin feeling super soft, and the sugary scent will allow you to channel your inner Amelia.

And, since you can never have too many sweet-smelling products, the box also includes Pure Anada Natural Cosmetics’s Cocoa Mint Lip Balm. The mix of cocoa and peppermint provides a cozy yet energizing aroma — given the hot cocoa vibes of this product, we have a feeling this would be a favourite of Amelia’s during the cooler seasons in Kentucky.

Take time to relax and create your own cozy space

The moment she walks into Noah’s house, Amelia feels a sense of coziness and warmth — there’s just something about the space that draws her in. We included a few items that will help you cultivate that cozy atmosphere in your own home.

Though the bathroom is where Amelia often hides as she’s trying to work through her feelings for Noah, for many, it’s a spot where you can relax after a long day. To make the experience better, try out the Macaron Bath Bombs from Yummy Bubbles. And, why not take inspiration from Amelia’s shower performances and sing along to a few of your favourite tunes while soaking in the steamy, fragrant water?

While we’re not sure how much colour Noah would be inclined to incorporate in his kitchen, we bet Amelia would eventually convince him to add in a few whimsical dishcloths, like this colourful trio from Now Designs by Danica. Whether you’re a pro in the kitchen like Noah, whipping up family recipes with ease, or whether you’re more of a biscuits from a can girl like Amelia, these dish cloths will add a sense of fun to your kitchen tasks.

Indulge in some sweet treats

Sending an entire pie through the mail isn’t exactly an easy feat — plus, the only pies we’re really interested in sampling are the ones crafted at Noah’s shop. So instead of sending pie to indulge in after reading this rom com, we opted to include a few other treats that will tantalize your sweet tooth.

Fudge is a cozy classic that it’s hard not to love, so our October box has a package from Chocolate Moose Fudge Factory. Whether you want to indulge in the whole bar all by yourself or share during your own family game night is up to you.

Given Amelia’s obsession with mastering pancakes (and Noah’s unwillingness to give her his secret recipe), you know we also had to include some type of mix so you could whip up your own batch of the breakfast staple. The Vanilla Pancake Mix from Orange Crate Food Company is so foolproof, even Amelia could make them — all you need to do is add some milk or water and stir until you’ve formed a batter. Just try not to burn them — you wouldn’t want your own visit from the fire department.

5. Did you see the twist with Susan’s character coming? Why do you think Amelia’s relationship with her developed as it did?